Nelson Mandela is dead, may he rest in peace. We need more world leaders like him. Here is Italy's official reaction to this very sad news. Italy's reaction to Mandela's death

I agree, we lived in SA during THOSE years, there were certain parts of the community who stood out with their views, I agree, RIP,

He did apparently admit to some 120+ acts of 'terrorism'..

This may be of interest Mandela and US terrorist list
There are many forms of terrorism and Apartheid is one of them. Mandela showed the world that peace and reconciliation may prevail, under the most difficult circumstances, if there is goodwill and a genuine desire for peace and freedom. This is Mandela's most outstanding legacy for which we should all be grateful.

Without doubt, his legacy is only good !

Both Thatcher and Tebbit (still does) saw him as a terrorist who is to say? This news was announced on the BBC yesterday afternoon when they interrupted radio 4 to say he had died... I thought of posting about it, but thought it perhaps not really appropriate, as much for the saturation news I knew would hit us all for days on end. I see it a bit like a side of Christmas and other events that give the media news to fill their schedule. Now they question those that saw him as a terrorist - for what reason I ask?  I think he lived up to his aim of wanting to be thought of as living a good life and hope the media do not try to pull him down like they have done others.

Well done him, in the end, RIP.

ps:for me, I'd rather change the subject !

And APARTHEID was terrorism as well. But Mandela and de Klerk managed to forge ahead and change the predictable course of history. The ANC was created in response to an oppresive system based on ignoring elementary human rights for the benefit of a minority. And I have never been an extremist, but I do care for the dignity of all human beings.
As I said, what was achieved in South Africa was a miracle. They set and example for the rest of the world as we could have seen a bloodshed.

Seems pretty clear that we are in agreement then ? He WAS a terrorist ? and he became a wonderful man, as I say, RIP.

He has st an example for every country to follow, including Italy. This is what Letta says in his letter of condolences to president Zuma (see my original link). I found it most interesting, as he also talks about "regionalisms".

I worked at the library at the University of Cape Town in the late '70s/early '80s, where there was a special collection of banned books on the ANC. Special permission could be obtained to view the books for research purposes. There was an ongoing debate amongst the librarians and the academics (including JM Coetzee - Booker Prize & Nobel Prize in Literature winner) as to whether the Dewey Decimal catalogue code should be that for "terrorists" or "freedom fighters". "Freedom fighters" usually won! 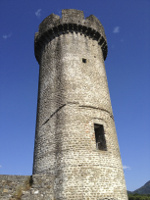 Yes it all depends on who is in charge... Freedom fighters for some... terrorists for the other side.. but then, there is also terror and terrorism which are official and practically condoned, while the other side is condemned... In any case, violence cannot be justified; however, violence was not limited to one of the sides. To obtain a peaceful transition in that sort of climate, was a miracle. And this is why Mandela will always be remembered.

and why we should be a little fearful of what happens next. Whilst he was alive, I believe that certain people knew that to step out of line would bring on the wrath of many. My brother lives in Cape Town and I have been many times. We must just wait and see but I am worried.

Terrororism exists depending on which side you are on. He would not have called it terrorism, but the armed struggle.  The terrorism in Syria is reported as being 'Assad's opponents', because we like them. The terrorism in North Africa was called variously Egyptian, Tunisian Spring.  Its all words, because the media and politicians imp on any bandwagon going.  Thatcher loathed Mandela (which proves she was an evil bigot), because he stole her thunder, and the Queen fell out with Thatcher big time over SA.   Reagan the same.  Mandela however, refused to dole out labels like Thatch and all the other politicians, and ultimately beat them at their own game.  Just go through the headlines of papers like the Sun and see their hypocrisy.    AS with all things, the moment when words like war, terrorism become conflict, struggle,  opposition is the moment when political police think there is capital to be made out of it.

Well said, Modi! I visited South Africa back in 1969. I have not been back ever since. At that time, it was a terrible place. I am glad that they had people like Mandela and de Klerk to work together in order to avoid a bloodbath. And I do hope that others will follow their example. My daughter went there with a group of friends to watch the Soccer Championship. She described a totally different country. I was very glad to hear her report.

Mandela was head of the "Spear of the Nation" - equivalent to the military wing of the IRA. The acts of terrorism under his leadership are clearly documented and nobody denies they happened. One might argue that he is part of the proof that terrorism works?

Avoiding a bloodbath? - around the late '90s the ANC officially apologised for killing 60,000 people - mainly supporters of their black opposition, Butholeze's Inkatha movement. Much of this happened during Mandela's ostensible leadership of the ANC. Anybody care to guess what the real figure was?

Whatever his qualities, there are lots of questions that need to be answered before he becomes beatified by popular vote. Certainly his PR machine deserves congratulations for convincing much of the world that he was nothing but a kindly old man and a force for good.

He was 'beatified' the moment he walked out of prison.  And certainly he deserves it more than some official 'beati' .  I think there are no questions to answer, certainly on his part.  He lived his life openly and honestly.  What I find insulting is the practise of beatifying anyone who dies, this 'you can't speak ill of the dead'.  Why not?  There are people who die, and you think, Good.  Why not have the courage to say instead of the mealymouthed rubbish people spout.   Just ever more hypocrisy.

While some may be "beatified" others are judged and "condemned" without trial or jury. Blame human nature and the media.
To spend 27 years in prison for political or social reasons, being made a scapegoat for collective actions and to do this with dignity is not easy. And I very much doubt that Mandela, personally, would have killed anyone. But the main reason why he will be remembered is what he did after leaving prison, which was to bring peace, security, and foster co-existence and mutual respect to a country which could have easily fallen apart and be immersed in a bloody civil war. This is Mandela's legacy and the reason why he should be not only beatified, but canonised. "Santo subito!".

He was head of the Spear of the Nation during the time they chose to pursue terrorist methods.

He was imprisoned for leaving and entering the country without a passport, technically a criminal offence. The terms of his parole included renouncing violence. He refused, thereby failing to meet the terms of his parole. Seeing it from the law's point of view, he chose to stay in prison.

When he went into prison he was custodian of an organisation engaged in bombings and killings. He came out a gentle, wise, kindly old man. From the law's point of view, prison worked well in his case.

South Africa is currently in parlous condition, with no economy and a failed currency. Many of its most capable people have left. F W deClerc sponsors the SAINT (South Africans in Need Trust) charity golf day at Foxhills and his keynote speech every year focuses on trying to persuade South Africans to go back. He denies the crime figures...........

Meanwhile the ANC is under constant criticism for corruption and wasting resource. Desmond Tutu has left the party and is one of its main critics.

Or you can ignore the facts and go for posthumous glorification, beatification, canonisation, whatever.

Goodness me! It really looks bad when you say it, but why can't you look at the facts?Spear of the Nation
To enter the country without a valid passport! What a hideous crime! Really worth 27 years in prison, at least...

What about Apartheid? That is hideous and against basic human rights.
May I remind you that Pope Francis was accused of hideous crimes by the current Argentinian government... Oh yes, they changed their tune ever since Cardinal Bergoglio became Pope Francis. Not good for their image.
Slander has always been used to justify what is not justifiable.
Corruption, mismanagement? It probably existed before under the name of opression and institutionalised slavery. And that was the reality in South Africa at the time. I've seen it with my own eyes and all I wanted was to get away from there, as soon as possible.
It is a miracle that they avoided a bloodbath!

Gala Placidiiawhy can't you look at the facts?Spear of the Nation wrote:It is a miracle that they avoided a bloodbath!

Ah, so your version of the "facts" is a link to the popular press. Laughable. I rest my case.

And once again, ask the families of the deceased Inkatha supporters whether they think they avoided a bloodbath.

IMHO it depends where you sit,

Depending on your position someone, like Mandela, was either a terrorist or a freedom fighter.

Whichever he was before he spent 27 years in prison, he became an international hero when he was released.  Why?  Because, instead of taking revenge on his oppressors, he advocated peace and forgiveness and reconciliation.

As Justin Welby, the AB of C, said today 'Nelson Mandela showed his courage by his determination in the face of evil and by his humanity in the experience of victory'.